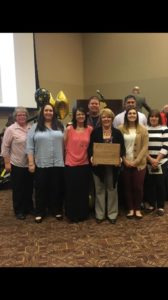 It seems that whenever some kind of tragedy occurs in our county, our dispatch center tends to work together in the chaos that comes with it. To the outside world, if they were to enter any com center in the middle of any disaster, they would have no clue where to even step in and help. Our dispatch center prides ourselves in working together by helping each other answering the radio, answering the phones, making phone calls, etc. Over the past few years, we have had multiple examples of the excellent team work throughout our center.

On January 17, 2016, we had one of the worst things to ever happen to a dispatch center. We had received a call from a female saying that her boyfriend was going to kill an officer, as well as her. We eventually got out of her the name of her boyfriend, as well as her name. Since we knew this information, one of the other dispatchers located his address in our CAD system. We figured out that he lived in Danville. In our center, we do hourly time checks for our officers. One of Danville officers was not answering his radio. The dispatcher working that station kept trying to mark him on the radio, as well as trying him on his cell phone.

At this point, Knox County Sheriff’s Office Deputies, as well as other county units were aware of the threat made per the female’s phone conversation. This was close to shift change, so several other deputies and officers had marked on and were heading to Danville to check on our officer. Once we had at least deputies on scene, they went to check on our Danville unit. I personally still remember hearing the deputy come across the radio as he told us he found our officer and he was deceased.

The mood in our dispatch center instantly changed, but we knew we had to help find the guy who did this, as well as keep other officers safe. One dispatcher started working on the C.O.P. Alert in LEADS, while other dispatchers were answering the phones and making phone calls to essential personnel. The SWAT team was called out, as well as phone calls to surrounding agencies. This was all due to us finding out that the individual had taken the patrol car. We also had received a few calls from neighbors of the individual saying that there was a fire outside of his house. We had advised the fire department of what was going on and they decided to stage in the area. Not too much longer after all of this, and after a short foot chase, the individual was detained and arrested. The patrol car was also located. I believe that this is one example of how well not only the dispatch center, but also all agencies work together as a whole for a common goal.

Another example, in March 2017 we had a standoff that happened in the city of Mount Vernon. We received a 911 come from someone saying they had a female who was a sister of a male who was holding his girlfriend hostage and he had a gun. We did get their names and the address. The male subject had also fired two shots. We had officers respond to this address and they had us call out the SWAT team.

During this time, we also received multiple 911 calls of a fight breaking out on the opposite side of town involving a bat. While one dispatcher was handling the Mount Vernon Police Department radio channel and logging everything they were saying, another dispatcher was informing the Knox County Sheriff’s Office Deputies about the fight calls, since the MVPD was tied up. While the dispatch center was being flooded with other calls, we were advising the callers the officers were tied up on an active call and they would get to them as soon as they freed up. Whenever the officers asked us to, we would call crucial people or run people when needed. We also logged everything that was said into the call. We also had to send out alerts to the public about what was going on. In the end, the officers apprehended the subjects and there were no reports of injuries.

In July 2018, we had another standoff in the city of Mount Vernon. This incident is another example of how well we all work together as a team in times of crisis. Officers were previously looking for the individual due to his connection with a burglary in another county. Our center had received a tip that he was at this residence. We relayed it to our officers and deputies, in which they responded to the address. When they arrived on scene they discovered that the subject was in the apartment as well as a female. The male did threaten to shoot himself if the female went outside.

Our dispatch center handled everything until our Tactical Dispatch Team arrived on scene, which we just created in the last two years. Until they got on scene, the dispatcher working the MVPD station logged everything that was said and ran people when asked. The units on scene called out the SWAT team themselves. When a unit requested a medic to be on standby, another dispatcher toned them out. We also had sent out an alert to the public about what was going on. When the news media called in, we had advised them where to stage. The female did end up freeing herself and finding her way to the officers. She started to be uncooperative and was eventually taken in to custody. The officers had to make entry into the apartment and found the subject in a closet and arrested him safely.

Even when our center is not dealing with calls as drastic as those mentioned above, we still handle other active calls. During those calls, dispatchers are busy helping each other out and working together as a team. If someone is on the phone, they will either get that person’s radio or call someone for them when needed. They will also help run people in LEADS or help look them up in CAD. We also help log items into calls for each other. We are always working together as a team in our dispatch center, no matter how active a call is. In our center, we are more than a team, we are a family.