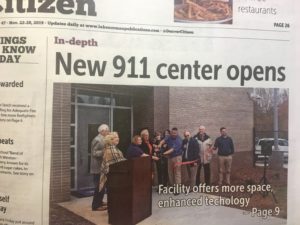 The 2019-2020 year has brought many changes to our all-in-one PSAP located in western North Carolina. In April 2019 a promotion welcomed a new Operations Manager, Scottie Carpenter, who has been employed with Lincoln County E-911 for 15 years. Her promotion left the newly approved Training Specialist position vacant. This brought Kayla Mullins from Charlotte Fire Department to the team in the same month. Two big changes in administration!

In August 2019, the center suffered a cyber attack from ransomware that crippled all technology and software. The Communications Center worked without CAD for 22 days. Throughout this time several other applications were impacted and the effects were felt for months. The team never waivered and offered outstanding service to the field units and citizens of Lincoln County. Once CAD was operational, many frontline telecommunicators came in on their days off to enter calls from sheets of paper in an attempt to update CAD as quickly as possible to ensure proper report numbers would be generated for the remainder of the year.

September 2, 2019, brought the launch of the first ever Lincoln County E-911 Training Academy. This was an 8-week program taught by the Training Specialist prior to new hires being released to a CTO for on the job training at the console. Technology was still very limited and a lot of data was lost indefinitely from the attack. 3 trainees successfully completed the academy, despite the adversities, and entered Phase 2 on the floor with a CTO. Each came to the floor with EMD, EFD, and EPD certifications as well as DCI modules 1-3.

During the cyberattack and training academy, final touches to the brand new stand alone facility were also underway. The opening date for Lincoln County E-911 Communications Center was set for mid-October. Until this point, the Communications Center operated out of a small space in the Sheriff’s Office. This space required administrative staff to share an office and a server closet repurposed to include two small desks and a mini file cabinet. On duty employees (sometimes 7 on at a time omitting admin, and only 6 consoles) were required to share a mini refrigerator and were often so close together while working that one phone call or radio transmission could be dominated by the person next to you talking at the same time. This space was roughly 1000 sq ft with one bathroom and lockers contained within the same space and faulty plumbing that was known for ruining documents stored under floor tiles. The new Comm Center is roughly 7200 sq ft with room to expand into 14 consoles, with gated parking, a fully functioning kitchen, separate multi-stall bathrooms and showers, 4 offices, a conference room, 44 lockers in the hallway, training room, quiet room, data center, electrical room, mechanical room, and lobby for the public.

Opening day in October brought with it a new phone system. We ditched Solacom, who was no longer supported, and went with Vesta Hosted Solutions. You can say those 6 months were a whirlwind! We are now settling into our new facility and going through the shakedown phases of new construction, 2 trainees have completed training in a record time of 5 months of the 6 month goal with no extensions to training necessary and we are gearing up to launch Training Academy 002 in just a few weeks! We are 3 away from full staffing at 21 front line telecommunicators and 4 administrative personnel. We are small in comparison to neighboring agencies but we are mighty and leading the way in Next Gen technology!

The next @FCC monthly meeting is coming, full of big ideas and big efforts.

Today @POTUS designated me Acting Chairwoman of the @FCC. I am honored and excited to lead this great agency. Now more than ever we need to expand the reach of communications opportunity for all of us. We have a lot of work to do and I can't wait to get started.

Congratulations @JRosenworcel for your designation as Acting Chairwoman of the @FCC! https://psc.apcointl.org/2021/01/21/apco-congratulates-rosenworcel-on-appointment-as-acting-fcc-chair/

We are proud of you too! Thanks for your service!

So proud to work for the District of Columbia’s 911 and 311 center, which plays an integral part of the city’s public safety response. All hands on deck today for #INAUG2021.

Why did @APCOIntl take an unprecedented step to sue the FCC over its 6 GHz decision? Check out our newest blog: https://www.apcointl.org/update-on-new-fcc-spectrum-rules-why-apco-is-suing-the-fcc/

Thank you for your life-saving service particularly during these challenging times in the District.

Last week, the Office of Unified Communications handled over 20K 911 calls for service, and over 30K 311 calls for city services in the District. #WeAnswerTheCall

.@FCC issues warning that amateur, CB, and personal radios (such as walkie-talkies) cannot be used to commit or facilitate criminal acts: https://docs.fcc.gov/public/attachments/DA-21-73A1.pdf

.@MDHealthDept issued its guidelines for our 24 local health depts. Phase 1A #vaccines should "prioritize first responders... at increased risk of exposure or who must be in the field OR WORK ONSITE." (Emphasis mine & reflects inclusion of our 9-1-1 Specialists!) #NG911 1/2

A joint brief of petitioners including @APCOIntl was filed 12/18 in federal appeals court challenging the @FCC's 6 GHz Order. Our public safety-specific arguments are in Section IV.A and at page 76. https://www.apcointl.org/download/initial-brief-by-joint-petitioners-regarding-6-ghz-order/?wpdmdl=44202