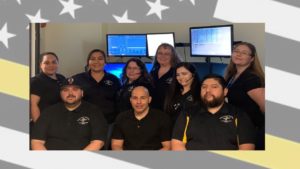 In August, our center’s long term director left abruptly. The person that was asked to step in as the center’s director resigned after a week. The morale in our center was already very low, so losing two long term employees brought it down even more. The dispatchers had very little faith in anyone, including themselves. The other supervisors and I pulled together and decided that we were not going to let this bring our center down even more. We delegated jobs, each taking something that was out of our comfort zone but something that supported our center. After what seemed like years, a new director was hired. I almost felt bad for the mess that she was walking into,but after spending a day with her, I knew she was the one to help bring our center to where it should have always been.

Now, after only a few short months, our center is on the road to recovery. The dispatchers seem happy and proud of the job that they are doing. They seem interested in learning and growing and becoming a robust unstoppable group. The center and dispatchers have started receiving the recognition that they have earned and deserve. They just needed someone to support them and let them know that they have someone that cares and will have their backs. We have developed new protocols, working on developing policy and procedures. Our new Director has created new positions that were long overdue but desperately needed. I am so impressed with the way that the dispatchers passion has been renewed, and they have taken ownership of the job that they do.

The dispatchers think that the new director gave them purpose. What they do not realize is that they had so much in them; they just needed guidance and a whole lot of TLC. We have one of the most  amazing, giving, loyal group of people, and I am so proud to be part of such an excellent team!