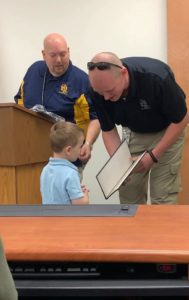 Today we had a special guest of honor who was given a 911 life saving award, David Lee Molsey III, age three, who, on December 31st 2018, made a call to the Wood/Wirt County 911 center regarding a medical emergency relating to his mother.
David, who outside of his mother, was alone in the house and called 911. David’s mother had taught him how to call 911 in case of any such emergency. David courageously stayed on the line with dispatchers until paramedics from St Joseph Ambulance Service along with Mineral Wells VFD and the Wood County Sheriff’s Office arrived on the scene.
For his bravery David was honored by our Center, The Wood County Deputy Sheriff’s Association, and members of the St Joseph Ambulance Service, and the Mineral Wells VFD who sent him home with a new bike and other special gifts.