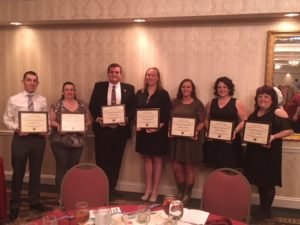 The Outstanding Performance Shift Award: for the evening of May 15, 2018, after receiving 7.5 inches of rain within three hours; a flash flooding event occurred causing an influx of emergency calls to Frederick County Emergency Communications Center. The calls ranged from flooded basements, a partial building collapse, to people stranded in or on vehicles, including 55 water rescues. Over 300 9-1-1 calls and almost 900 ten-digit overflow or non-emergency calls were handled in five hours.

This award winning crew was honored on Saturday April 6 at the Tri-State Telecommunicators Consortium Banquet that features staff from Maryland, West Virginia and Virginia