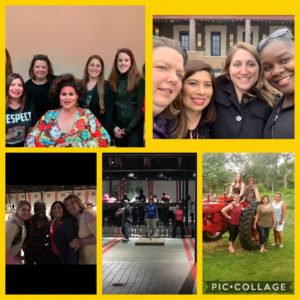 The State of Michigan was scheduled to take our radio towers down at 0900 for a duration of up to six hours. Prior to the radios going down, we tested the backup radios and the fire department paging. Radios worked fine but the paging was not. After some work with radio repair and IT, they were up and running at 0857. At 0900 the radios were taken down and we went to use the backups as planned and there was only one usable frequency, which was programmed for RV/FR. We were able to use the desk units for SS/EP and Fire. We had no ability for TAC channels.  Staff from Radio Repair and Comsource were going around resetting computers and trying to find the issue.

At the time, our portable radios didn’t work in the center and 90% of the transmissions over the radios were being cut off. Eastpointe and St. Clair Shores were only receiving some of the radio traffic depending on their location, so we had to call command by phone. It was chaotic at times as radios were bonking and echoing but the shift worked together as a team and helped each other out.  Susan, Melanie, and Monica did an excellent job having responders repeat their traffic over and over as well as making sure their own transmissions were being heard.

At approximately 1630 (7 1/2 hours later), a transformer blew in the area of 13/Kelly and caused the center to switch to generator power. 10-15 minutes later the radios came back up and things returned to “normal”. WHEW…THE END!!

Our shifts works like an amazing team all the time but when things hit the fan we come together and work as one well oiled machine!!! We are the NEW golden girls!!