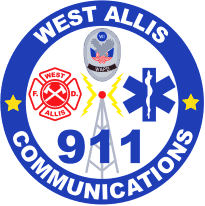 West Allis Communication Center (West Allis, WI) handles 911 and non-emergency calls for the police and fire department and all dispatchers are EMD certified. We are located inside of the Police Department. We may be a smaller city, but the busiest of the suburbs surrounding Milwaukee.

On the morning of September 10, 2019, around 6:30, a lightning bolt struck our communications tower, which is located directly outside the window to the dispatch center. The concussion from the lightning strike could be felt within the center. The lightning strike completely disabled our dispatching capabilities, by damaging our radios, telephones (911 and non-emergency lines) and computer CAD systems. To lose one system is critical, but all operating systems could have been catastrophic. Command Staff quickly checked on the center and its employees, but would not have known anything had happen based on the calm demeanor, well, except for all of their screens being dark and the thunderous sound the lightning strike had made. The dispatch staff quickly acknowledged we essentially had a “dead center” and needed to react in order to still serve and protect the city. Immediate contact was made with Greenfield PD advising of the incident and we had to switch incoming 911 calls to them and in turn have them transferred back to cell phones within our center. One dispatcher was sent to West Milwaukee PD, which contained our mirror CAD system, to allow us to seamlessly operate off-site. Unfortunately, luck was definitely not on our side this morning, scheduled CAD updates were not completed so the systems were not compatible – no back-up system to turn to.

The staff was left with no choice but to use “old school” dispatching techniques until the IT department could start to restore some of the devices. Communication with police officers and the fire department could only be done with handheld radios and calls for service were written on old dispatch cards, as well as a whiteboard. The effects of the lightning strike were felt for days in some areas and weeks in others. This is not something you prepare for, but dispatchers are a special breed – WE STAY CALM UNDER EXTREME CIRCUMSTANCES.  It is comforting to know when a major incident takes place, you are working with people that are well trained and remain calm under pressure. You never realize how much technology aids in your work, until you lose it all.  Kind of like when someone loses his/her cell phone – the world comes to a screeching halt, well, except for dispatchers we just act like it is no big deal.

Thank you to Greenfield PD for handling and transferring our 911 calls for almost a week, the command staff and other employees that rushed to make sure we were all ok, and the staff I work with on a daily basis – we survived and did not miss a beat.