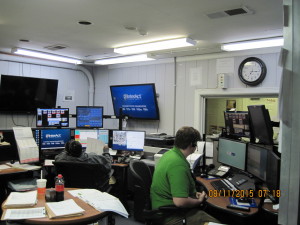 It was April 27th in the year 2000. I applied for a job where my only personal knowledge consisted of what happened on television. My trainer was a seasoned veteran who would soon retire. She was one of those people who could hear a license plate tag and would know who owned the vehicle. She knew not only the roster of our current clientele, but was familiar with their whole family tree. She was a force to be reckoned with, and quite frankly she made you doubt whether you could ever master the job in that way.

I remember my first shift alone. I had just returned from the academy and was as nervous a cat on a hot tin roof. My first big call was a structure fire reported near a prison. I got the call logged and toned out the responding departments and waiting to record the next phase expecting to hear one of them say fully engulfed Harrodsburg. In those days every volunteer would call out on the radio going to their personal vehicles.

I had a list of approx. 15 or 20 volunteers going 10-8 to either the station or the reported location. It had been pounded into me that everything your heard should be noted. I had my units logged and then the equipment started going from the station, tankers and engines and brush trucks and ladder trucks.

As they keyed up to go enroute I could hear the sirens screaming in the background. My adrenaline was pumping and I was feeling so proud of myself. There was no need to listen back to the dictaphone for missed transmissions, every unit was logged in real time, I knew I had it going on. Needless to say they did not find a fire and the caller was nowhere to be found. I remember feeling disappointed that I could not count this as my first structure fire experience. And then I thought, “how horrible was that?” looking for someone to lose property or life for my “first structure fire” experience. And then they began to clear the call one by one.

When the call was completed I realized that all of the equipment was back at the station but I had several individuals unaccounted for. I waited for a while to see if they would return. It was 3 a.m., I am alone with my imagination running rampant. I’m thinking now, not only did I not have my first fire experience but I have now lost all these firemen. I was imagining them wandering around in a woods near the prison. So I did what any novice would do I called my Supervisor to tell what had happened and to ask what I should do. So glad she had a good sense of humor. After all she was the one who taught me about accountability. I could hear her in my head saying “everything said and everyone responding should be accounted for”.

She could tell that I was upset even though I tried to camouflage it, when she regained her composure, from hysterically laughing, she simply said, you only need to log the equipment”. “I’m sure they will all find their way back home precious.” Well now, didn’t I just feel like an idiot. From hence we learn, ha ha.

Sitting behind the microphone with my headset, my pen and my paper then, I was looking into a whole new world. In this world I would be responsible for life, limb, property, relationships and even hopes and dreams. I have learned that no matter how foolish it sounds it is the realest thing my caller will ever experience.

I learn every day that I am the one with the answers. Somewhere inside my radio there are solutions to everyone’s situation. If I don’t have the answer and if the answer can’t be found on the radio somewhere it exists and they know I will find it and I will help. Because 911 has told them so somewhere in their history.

My favorite story in our agency involves a police officer. The third shift dispatcher became ill during his shift and passed out. After several attempts to reach him, one of the officers went into the station. He found the Dispatcher passed out and immediately ran in to help him. When he could not arouse him he dialed 911. And of course 911 rang. He answered and did what he has heard the dispatcher do a thousand times. “911 where is your emergency?” he asked. When there was no response he hung up. Determined to get help for the dispatcher he dialed once again. And again no response. So he dialed yet a third time. Answering with a little more authority and a bit irritated “911 where’s your emergency? When there was no answer this time he shouted at the unknown caller, Stop playing on the phone I have an emergency here, I have a man who needs help. It was then that he realized exactly what we do and where we do it from. He now realized he was the silent call and immediately got on the radio to request EMS. If this happens from within we can only expect the same from without.

If the on duty police officers only source of help is the 911 operator in an emergency we have to know we are “IT”. I was seduced and adopted by this profession. It was a subtle seduction occurring over time with each call and each response and each outcome. Whether they were little old ladies just looking for someone to talk to, or children needing help with their math homework. A crying woman who had been beat by her boyfriend or a woman in Georgia who had called her childhood phone number in Kentucky while she sat in a hot tub of water bleeding from her cut wrists. The seduction was all encompassing, the good the bad and ugly. And we will always have a place in our hearts for those who are waiting on the next space ship. The greatest compliment is to hear a caller say that when they hear your voice they know everything will be alright.

For those who are familiar with the TV show Monk, I have stolen his slogan. I can say with all sincerity that sitting behind the console at my center is a blessing and a curse. I am blessed to still want to be here after 16 years and still looking forward to doing it everyday. The curse is knowing that when it is time for me to go these experiences will be irreplaceable. I will miss each and every caller. If you know me and give me a call forgive me if I answer “911 Where is your emergency?” before I say oh hell this is Gail.

« Why I Am a Dispatcher and Still Doing It
Remembering Why … »