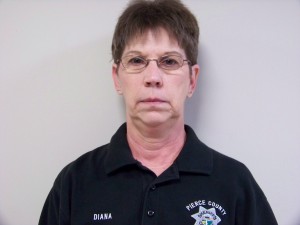 I began my dispatching career in Alliance, Nebraska in 1975. Working for the Alliance Police Department as a dispatcher/matron. I worked for them for 2 years and then my family became more important so I resigned. In December of 1979 I began working in another branch of law enforcement, for the Nebraska Brand Committee in Alliance. I worked for them for 18 years and finally decided to move from Alliance and go to work for the Union Pacific Railroad as a train yard dispatcher at the South Morrill yards.

The following year my partner and I decided to move to Eastern Nebraska to take over his family farm from his elderly parents and I saw an ad for a part time dispatcher with the Pierce County Sheriff. I applied. I stayed with them for a few years working part-time and then accepted a job with the SNARE Drug Task Force in Northeastern Nebraska.

After 3 years there it was time to come back home to Pierce County. So in 2007 I once again started doing what I loved — dispatching. Pierce County was one of the last counties in Nebraska to get E-911 dispatching. in June of 2009 we accepted the equipment and started planning our new system. So we remodeled the office. Ordered new furniture and security cameras etc.  We went live with our first 911 call on June 10, 2010.

During the fall of 2010, I was ask to be the Assistant 911 Coordinator and recording secretary for the 911 Board. Also during that time the Office Manager became ill and retired and I took over her position as well. Six years later I am still here. I am approaching my retirement age in about 5 years and will continue to plug away at this position until that day.

Dispatching and working with all the wonderful Deputies, Sheriff, City Police Officers and 4 different fire and rescue agencies in my county I have met some wonderful people and I have a wonderful group of dispatchers. Pierce County is blessed to have such caring people that answer the 911 phone in any emergency. I love what I do, but yes there are days that I say oh why am I still doing this. It gets into your blood and hard to walk away from.

« Telling Our Story
Because We Have the Answers »