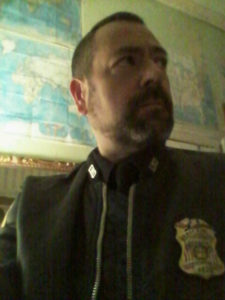 When you work with a group of officers, especially if you tend to take the same shift rotation after rotation, you become a close-knit group, able to anticipate each other’s thoughts and actions in a way that is inexplicable. You also become part of a brotherhood and sisterhood that goes beyond the headset and crosses into personal areas that, while we try to keep them silent and separate, are in fact acknowledgments of our loyalty to one another, and in all too rare instances, have occasion to give rise to outward expression, giving you a harsh reality check.

One night while on duty, late on evening watch, I was working PD radio and taking calls. I answered a 911 call from a woman who was having difficulty breathing, and was at home alone. She understood full well the situation she was in, and listened to my instructions with patience and courage. It was difficult to understand her words, but I had gotten her address and was clear on her location. As the call ensued, her condition worsened, so I handed off PD radio to my senior operator and took FD radio so I could expedite the response and broadcast patient updates to the responding rescue units. She was becoming desperate and beginning to show fear, panic, and was completely helpless as she was all alone. I stayed with her, telling her where the rescue unit was, making sure she knew they were getting closer. By the time the primary unit arrived she was unable to speak, but I could still hear that she had the phone next to her ear. I knew that my voice was the only reassurance she had, and though faceless and nameless to her, I knew that my voice was giving her the reassurance that help was there, that she was not alone, and we were going to do everything we could to help her.

The units made entry and took command, rushing her to our local hospital. I’d taken calls like this a hundred times over. The calls you know are desperate, but never end because you never know the outcome. About a week later, I found out in a private conversation, with a man I’d dispatched into danger and confusion many, many times, the outcome of a call that usually remains unknown to us.

A few after the call, one of our beat sergeants called radio and asked to speak to me. He asked me to meet him in the lobby outside the radio room as he needed to talk to me about a call. I met him, and he began by putting his hand on my shoulder. He asked me if I remembered a rescue call at an address in our Zone 5. I told him I did, that I had taken it. He said that he had requested a copy of the 911 call and listened to every word of it. He told me, quite suddenly, and staring me dead in the eyes, that if he had known his mother would have to dial 911 that night, and that it would be the last phone call of her lifetime, and that the voice which answered would be the last voice on earth she ever heard, he would have wanted it to be mine, and that in fact, the caller from that address in Zone 5 was indeed his mother, and that my words were the last words on earth from another human being she ever heard. He looked me in the eye and thanked me for comforting and reassuring her in her last moments of life, for staying with her, and that he could not have asked for a better man to have been there for her in her last moments.

That could have been any of us. I’m not unique in any way. We all take those calls. But we never really know what happens after we hang up and rescue takes over. We never know the people and emotions that continue after we pick up to answer the next call, as our last call heads to an ER somewhere. We never know whether or not we helped someone, comforted someone, or affected an outcome, even in the worst case, that assuaged fear and doubt, gave hope, or courage in the last moments of someone’s very life. I was blessed to know at least once in my career, I did something that helped someone even beyond the grave, in the person of her son, my colleague, my friend, and a brother I did not know I had. We work with these fine people through all sorts of routine and chaos. We seldom realize how quickly we can go from being just a voice to being the most important person in someone’s life, if even for the narrow few minutes of an average response time. We never know when we might indeed be participating as an intimate member of a family we don’t often acknowledge or realize we have, that a brother or a sister or a mother or a father while unseen, is ever liable to be very close. I learned that evening that there had only been a wire between us the whole time.